My Life As a Secret Service Agent

by admin
in Press Releases 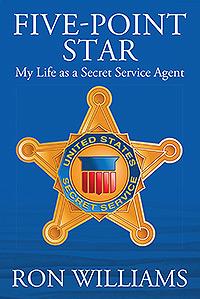 (EMAILWIRE.COM, August 03, 2022 ) Denver, CO and Los Angeles, CA  After more than 20 year on the job, retired Secret Service Agent Ron Williams was inspired to write this collection of personal stories by the murder of Julie Cross, the first female agent killed in the line of duty, and the death of three agents protecting Queen Elizabeth. Five-Point Star: My Life As a Secret Service Agent has been published by Secure Strategies International LLC.

It took over ten years to bring the perpetrators who murdered Julie Cross to justice. A dedicated LA Police detective identified and pressed the prosecution of Terry Brock and Andre Alexander. Brock is sentenced to life in prison, and the shooter, Alexander, is on death row. The investigation of the death of the three agents on duty protecting Queen Elizabeth led to the exposure of major crime and corruption in Mariposa County, California. These and other stories reveal an inside look at the life of FBI agents dedicated to a life of service to their country, and how these experiences shape an agents outlook on life and faith.

Five-Point Star is a candid depiction of the stress U.S. Secret Service Agents operate under daily, including protecting the President of the United States and foreign heads of state, and investigating threats and financial crimes. The book tells the story of how Ron Williams became an agent in the Secret Service and served 16 years in financial crimes, investigating credit card and identity fraud, counterfeit money and threats against the President. He also commanded one of the first counterterrorist attack teams, and considers the ten days he was assigned to Pope John Paul as the highlight of a long and storied career.

Williams draws a line between his work and his outlook on life and religious faith, making Five-Point Star perfect for anyone interested in federal law enforcement as a career or those intrigued by the lives of Secret Service agents doing some of the most dangerous protection work in the country.

At 268 pages, Five-Point Star is available online at Amazon and Barnes and Noble for a maximum trade discount in quantities of 10 or more and is being aggressively promoted to appropriate markets with a focus on the memoir category.

About the Author: Ron Williams served over 22 years as a Secret Service agent, and was awarded a Special Achievement award by the director of the Secret Service eight times. Williams is the founder of Talon Companies, which consists of three security and risk management firms that provide professional, discreet security services to companies, corporations and government agencies.

Action for change: one bird at a time via collaboration between IFAW and LAMB

Endpoint Security Market Worth $18.6 Billion by 2025, Growing at a CAGR of 5.9% from 2020- Global Market Opportunity Analysis and Industry Forecasts by Meticulous Research®

Pet Food Ingredients Market is Projected to Grow $44.5 billion by 2027

No Result
View All Result